Blog
Classical Blog
This is a place where our classical hosts, interns and artists can share their stories, viewpoints and point of view on topics related to classical music and the arts in general. Come back to this page often to read the latest and share your comments.

You Can Understand a Symphony, Too!

An energetic quiet descends on the auditorium as the light dims. You welcome the concertmaster with polite applause, and he leads the orchestra in one final tuning. The conductor strides confidently onstage, swinging her arm with panache to gesture for the orchestra to rise as she takes the bow on their behalf. As she takes her place at the podium, the audience on the edge of their seats, a few coughs break the silence. Suddenly, she slashes the air with her baton, drawing out Beethoven’s famous bah-bah-bah-bahh! and they’re off to the races with his Fifth Symphony.

You let the music wash over you in your seat. Its tense, agitated rhythms draw you in like a racing heartbeat, driving from one moment to the next. But after a minute or two, you find your mind wandering. Am I in the mood for dessert tonight? What was that TV series my sister told me about? Where did I leave my keys again?

We’ve all been there. Twenty-first-century listening habits have moved music to the background of our lives, for better or for worse. It forms the soundtrack to all sorts of activities: our morning drives, our daily chores, our remote work. So when we watch an orchestra perform a symphony, it can often feel much the same. The music becomes almost background music for sitting in an audience, accompanying us through thought rather than engaging us directly.

But symphonies can provide an incredibly fruitful experience if we give them our active attention. Composers of the eighteenth and nineteenth centuries wrote them as a sort of personal statement—an argument that the public was supposed to consider, evaluate, and ultimately respond to. In fact, it was not uncommon for eighteenth-century theorists and composers alike to describe such music in terms of classic oration. They believed that the five elements of oration (invention, arrangement, elaboration, memory, and performance) could manifest even in a piece of music without text. So to listen to a symphony actively, it can be helpful to think of it instead as a musical essay, where important melodies form a central part of the composer’s musical argument.

Beethoven, for instance, created an entire four-movement symphony out of that one simple bah-bah-bah-bah. The first movement is a meditation on bah-bah-bah-bah, or, more specifically, on the melody that he develops out of it in the first few moments. He modified the tune to examine its ideas from every angle, softening its edges here to create a lyrical theme, blasting it from the horn there to herald its terrifying return. If you listen to its progress across the first movement and the movements that follow, what you will hear is not just beautiful music, but a thoroughly studied musical idea that can stimulate you intellectually and—hopefully—leave you enthralled.

Of course, this type of listening is a skill that needs guided practice. Speaking from personal experience as a former high school band nerd, it is difficult to deduce the structure of a symphony on your own without any prior experience. But happily for classical music lovers in Rochester and beyond, you can learn this rewarding skill as part of the “A Whole Wide World of Music” course series through Summer @ Eastman! These courses explore not only symphonies, but sea shanties, pop songs, Carolina beach music, guitar music, and soundtracks to dramas about British queens. We hope to pique your curiosity about all of these unique genres with their own rich traditions. If you enjoy them as much as we do, you will leave with a whole new perspective on the possibilities music can offer throughout your life. It could even enhance your WXXI listening experience! We would love to see you there and explore the whole wide world of music together. 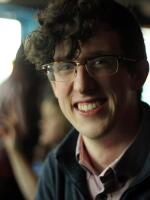 Stephen Johnson
A native of Herndon, Virginia, Stephen came to Rochester to earn his Ph.D. in Musicology at the Eastman School of Music. He has loved classical music and public media since his youth, when he was inspired by the radio broadcasts of Rob Kapilow on his local NPR affiliate. This set him on a trajectory to earn his Bachelor’s in Music Education and Master’s in Musicology from Indiana University.
See stories by Stephen Johnson
Classical E-Newsletter